Today, I am asking Governor Brown to veto Senate Bill 1 -- the largest transportation tax increase in California state history -- for a multitude of reasons as outlined in my floor speech against the bill. 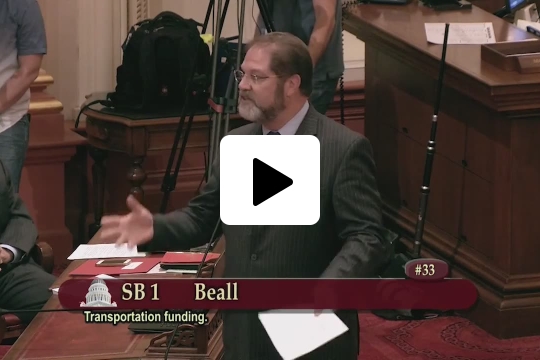 First and foremost, this is a regressive tax that places a disproportionate financial burden on poor and working-class families, many of whom are hurt most by a gas tax because of long commute times.

Secondly, this bill does little to make Caltrans more effective and efficient in providing for maintenance and safety of our roads, it simply throws money at the problem. We already have very high gas taxes and a large transportation budget.

My full thoughts on the topic can be viewed here.

The veto letter can be viewed here.

On behalf of the constituents in Senate District 37, I am writing to request your veto on Senate Bill 1 authored by Senator Jim Beall. I believe our constituents and the people of California deserve better than what this massive tax bill offers. I ask that you consider my objections to the bill below.
1. With the approval by the voters last year of Proposition 55 with its personal income tax increase continuance and Proposition 56, the tobacco tax of $2 per pack, I am concerned, and believe you should be as well, that the State has hit the Gann limit.

2. Last year you signed Senate Bill 32, which furthers the mandate to reduce the consumption of gasoline. In light of this mandate, a tax on gasoline is not a long term solution. We owe it to our constituents to develop solutions which fix the problem for years to come.

3. With our young people driving long distances to their places of employment due to the high cost of housing, we should be modifying the California Environmental Quality Act – which severely restricts developers’ ability to produce in-fill housing – to build more housing closer to job centers. After all, it is the State’s bad and severely antiquated laws that are now ruining our byways.

4. With the percentage of those in California at or below the poverty rate at the highest levels in the nation, we should not be taxing the poor to fix our highways. I constantly hear about college students that are actually starving and families having to decide between food and gas. Senate Bill 1 will just make this reality bleaker.

5. We should not be investing in public transit when ridership is down. Are the poor, who are supposed to benefit from this public service, driving or carpooling instead? Additionally, something that is not often discussed is the significant wear and tear to arterial highways caused by the constant use of heavy buses.

6. We should be looking at more creative solutions to our infrastructure problems, such as an electricity tax for those who charge their zero-emission vehicles at home.

7. The bill provides for $70 million in “efficiency improvements” at Caltrans. If Caltrans reduces the 3,300 architects and engineers that have been deemed excessive, we can save $500 million. Then, if Sacramento outsourced 50% of our architects and engineers like most of the other states do, California can save another $200 million. I proposed a bill to do just that last year, SB 1X 9. Right there, we can achieve $700 million in annual savings. Why are we only aiming for ten percent of that amount?

Governor Brown, in the week that this tax has passed the legislature, I have heard great outcry from our constituents. They are concerned, as they should be, about their financial ability to stay in California. I urge you to veto Senate Bill 1 and instead investigate some of the more creative solutions which don’t include taxing the hard working people of our State.

Check out my weekly podcast by clicking the image below!