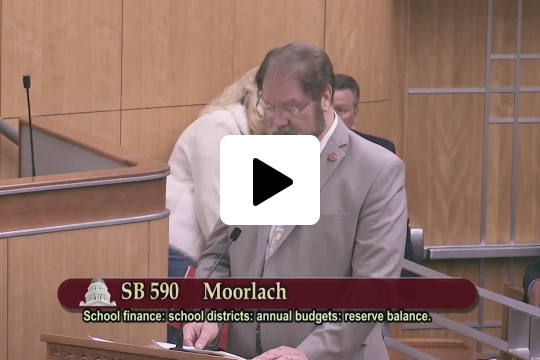 SACRAMENTO – Since 2014, there have been several attempts to repeal a cap that prohibits school districts from saving for a rainy day. Senate Bill 590, introduced by Senator John Moorlach (R-Costa Mesa), aimed once again to repeal the burdensome cap. Sacramento Democrats killed SB 590 in the Senate Education Committee last week.

Senator Moorlach will continue his efforts to repeal the cap by introducing a classroom protection amendment to SB 751 that gives locally elected school boards more discretion over their budgets so they can save for a rainy day.

This is a bipartisan issue. Sacramento Democrats and Republicans have agreed that capping reserves limits options for schools.

The letter went on to state that "the cap leaves school districts more vulnerable to insolvency during economic downturns by forcing them to maintain inadequate reserves.”

Earlier this year Democrat State Superintendent of Public Instruction Tom Torlakson weighed in on this issue in a budget hearing stating his opposition to the cap on school district reserves.

Check out my weekly podcast by clicking the image below!